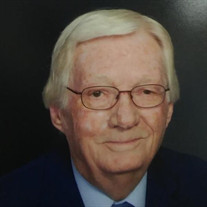 Harold Loyd Hopmann, 88, of Waco, formerly of Rosenberg, Texas went to be with his Lord on March 23, 2021. Harold was born on July 20, 1932 to Edwin and Hattie Hopmann on their farm in Beasley, Texas. Growing up in the country was a valuable experience. He was active in Boy Scouts, obtaining his Merit Badges for Life and Senior Patrol Leader. He attended Beasley Grade School and graduated Lamar CISD in Rosenberg. He joined the Four H Club and F.F.A. He raised a Grand Champion Steer, winning First Place at the Ft. Bend County Fair in 1948. After High School graduation, he joined the U.S. Air Force in 1951. His military career was with the 39th MATS Division stationed at Westover A.F.B. in Delaware, flying C124’s and C54’s over the North Atlantic and Norwegian Sea. After completing four years, Harold was discharged in 1956 as A Staff Sergeant. Harold moved to Houston to attend the University of Houston Downtown Business School, in The On The Job Training with Foley’s Department Store. After working 35 years in many management positions in their Home Furnishings Division, he retired from Foley’s in 1983. Harold was blessed with a daughter, Jamie Ann in 1965, by a previous marriage. He married Helen Lassetter on November 22, 1974. Helen had three children: Pamela, Larry and Mark Lassetter of Waco. Harold is preceded in death by his wife Helen Hopmann and daughter Jamie Ann Hunlock. Survivors include his children: Pamela Lassetter, Larry Lassetter and wife, Oleta, and Mark Lassetter; 7 grandchildren and 9 great grandchildren. A graveside service and military honors will be held at 2:00 p.m., Saturday, March 27, 2021 at Greenlawn Memorial Park in Rosenberg. Visitation will beginning at 1:00 p.m. in the Chapel of Davis-Greenlawn Funeral Home in Rosenberg. The funeral home is limited to 50 people or less and everyone must wear a facial covering. Words of condolence may be left for the family at www.davisgreenlawnfh.com Arrangements are under the direction of Davis-Greenlawn Funeral Home, 3900 B.F. Terry Blvd., Rosenberg, Texas 77471, Phone: 281-341-8800.

Harold Loyd Hopmann, 88, of Waco, formerly of Rosenberg, Texas went to be with his Lord on March 23, 2021. Harold was born on July 20, 1932 to Edwin and Hattie Hopmann on their farm in Beasley, Texas. Growing up in the country was a valuable... View Obituary & Service Information

The family of Harold Loyd Hopmann created this Life Tributes page to make it easy to share your memories.

Send flowers to the Hopmann family.