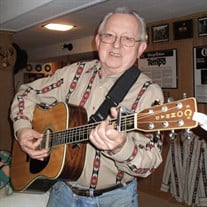 Gregory A. Gibson, 80, of Rosenberg, Texas, formerly of Chicago, Illinois, passed away on January 29, 2022 at his residence. He was born on September 15, 1941 on the South Side of Chicago to the late Arbie Gibson and Imogene Plutchak Foy. His childhood was spent playing guitar and singing with his beloved brother, the late Daniel J. Gibson. He was a man of many talents and occupations. He was proud of his service in the United States Army, where he was stationed in Okinawa and then on the shores of Lake Michigan during the Cuban Missile Crisis. He managed Lucky’s Pizza in Chicago and later went on to travel the country as a salesman for Wire Sales. In 1977 while working at Targ and Dinner, he nervously shuffled his feet as he asked fellow employee Kathie Kaczkowski to accompany him to a bowling banquet. They married in 1978 and together they ran the Gibson Music Store, which specialized in country music and instruments. Chicago Magazine once said that Greg could identify any country music song you could hum. In 1979 they welcomed their daughter Jessica and he took joy in spending his days singing to her, giving her piggy back rides, and searching for the misplaced records and albums that she “organized.” He spent his later years as the Master Handyman, and he joked that he could fix anything except a broken heart or the crack of dawn. Music was a constant companion in Greg’s life and he loved playing country music for his family and friends. He was thrilled to become part of the Honky Tonk Parade and have gigs at bars in the Chicagoland area. His knowledge of country music was unparalleled; before his death he consulted on a book about the history of the genre. Greg relished his role as Grampydoodle to Ayla and Aubrey. He spent his last years near them outside of Houston, Texas- playing cards with them, teaching them silly songs, and going to their dance and gymnastics competitions. Survivors include his loving wife of 43 years, Kathie Kaczkowski Gibson; daughter, Jessica Robach (Joshua); grandgirls, Ayla & Aubrey Robach; sisters, Donnee Berndt (Al), and Raynee Gibson; treasured life-long friend, Barbara “Auntie Barb” Zummo; along with numerous nieces, nephews, cousins, extended family, and a host of friends. A Celebration of Life will be held at a future date in the Chicago area. There will be lots of music, Lou Malnati’s pizza, McDonald’s Apple Pies, and love for a man who touched the lives of so many. For those wishing, in lieu of flowers, please consider making a donation to the American Heart Association at https://www.heart.org. Tributes, words of condolence, and funny stories about Greg may be left for the family at www.davisgreenlawnfh.com. Arrangements are under the direction of Davis-Greenlawn Funeral Home, 3900 B.F. Terry Blvd. (Hwy 59 South @ FM 2218), Rosenberg, Texas 77471, Phone: 281-341-8800.

Gregory A. Gibson, 80, of Rosenberg, Texas, formerly of Chicago, Illinois, passed away on January 29, 2022 at his residence. He was born on September 15, 1941 on the South Side of Chicago to the late Arbie Gibson and Imogene Plutchak Foy. His... View Obituary & Service Information

The family of Gregory A. Gibson created this Life Tributes page to make it easy to share your memories.

Gregory A. Gibson, 80, of Rosenberg, Texas, formerly of Chicago,...

Send flowers to the Gibson family.