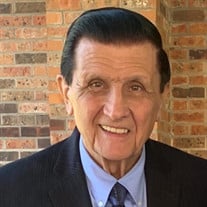 Glenn Ford Winston Jochec, 86, of Stafford, Texas was born on September 2, 1934 in Bellville, Texas to Franklin & Rosie Jochec, and went to be with Our Lord on August 10, 2021. He is preceded in death by his daughter, Glenda Jochec Stewart, his parents Franklin & Rosie Jochec, and his brothers Al & Leonard Jochec. Glenn is survived by his devoted and loving wife, Sedonia Engelhardt Jochec; daughter, Valerie Jochec Williams and husband, Chris; son in law, Mark Stewart and wife, Sue; grandsons, Weston & Colby Stewart and Anthony “A.J.” Williams; granddaughters, Tiffany Williams Wagner and husband, Matt; Kayla Stewart Cook and husband, Cameron; Emalee Smith and husband, Alan; Erin Stewart and husband, Matt McLeese; and Ellee Best and husband, Sam. Great-grandchildren, Hazel & James Wagner; Elliott, Audrey & Anna Cook; Sophie & Bennett Smith; Harper & Judin Best; and his only living brother, Lloyd Jochec and wife, Barbara, and multiple nieces & nephews. Glenn moved from Bellville to Stafford, Texas at a very young age and graduated from Missouri City High School. After receiving a basketball scholarship to Sam Houston State University, he graduated with a Business Degree in 1957. He met the love of his life, Sedonia Engelhardt, and they married having 64+ wonderful years together. Glenn honorably served our country in the United States Army and Army Reserves. He was a member of First Presbyterian Church of Sugar Land for 57+ years and served as a Deacon and Elder and taught Sunday school for years. He retired from Champion (later Simpson) Paper Company after 38 years of devoted service. Glenn was a man of character, strength and love. He never met a stranger and could make you feel like he knew you forever even if you had just met. He loved to tell a good story. He was a tremendous athlete and still holds basketball records at Sam Houston. He would say his claim to fame was receiving Honorable Mention All-American behind Wilt Chamberlain. His greatest joy in life was his love for his family and above all, his love for the Lord. He will truly be missed by all. Viewing and visitation will be held from 5:00 to 8:00 pm on Tuesday, August 17, 2021 at Davis-Greenlawn Funeral Home at 3900 B.F. Terry Blvd. in Rosenberg, TX. Funeral services for Glenn will be held 10:00 am on Wednesday, August 18, 2021 at First Presbyterian Church of Sugar Land at 502 Eldridge Rd in Sugar Land, TX.

Glenn Ford Winston Jochec, 86, of Stafford, Texas was born on September 2, 1934 in Bellville, Texas to Franklin & Rosie Jochec, and went to be with Our Lord on August 10, 2021. He is preceded in death by his daughter, Glenda Jochec Stewart,... View Obituary & Service Information

The family of Glenn Ford Winston Jochec created this Life Tributes page to make it easy to share your memories.

Glenn Ford Winston Jochec, 86, of Stafford, Texas was born on...

Send flowers to the Jochec family.