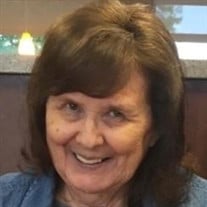 Genevieve "Genny" Adele Susan Vrana was called to eternal rest peacefully in her sleep on August 12, 2020. She was born on September 21, 1941 to Edward and Annie Susan in the little farm town of Guy, TX. Genny graduated from Needville High School (Class of 1960) and worked in the small Guy Post Office for a short time alongside her mother who served as the Guy Post Master. She then moved to Houston and attended the Southwest Business University and accepted a position at Gray Wolf Oil. In her free time, Genny played volleyball for a Houston traveling team and was an active parishioner at St. Anne's Catholic Church. It was there she met the love of her life. Genny was the Club Secretary for the St. Anne's Young Adults Club at the same time as her future husband served as the Social Chair. Hank and Genny became acquainted while planning and hosting events for the Young Adults Club and the two were married in 1967 in Needville, TX. Genny was dedicated to her family, but also did not fit the stereotype of a typical "Mom". Yes, she made sure the household was running like clockwork and prepared family favorites in the kitchen, but she could also take apart a car engine, troubleshoot the problems, and have it purring like new. She was also known for her woodworking abilities and home improvement initiatives. Genny was a loving wife, daughter, mother, sister, aunt, daughter-in-law, sister-in-law, and grandma. She was a friend to her beloved husband, Hank, to whom she was married to for 45 years and a dedicated mother to their two daughters. She will always be remembered for her green thumb in the garden, her savory cooking and baking in the kitchen, and her passion of always trying to catch that next big fish that got away! She adored her grandchildren and was a proud and cuddly "Grammie". As a Grammie, she was known for her chocolate chip cookie baking lessons and her ability to calm a young one when all else failed. Survived by her daughter, Pamela Vrana Rault and husband Richard of Mandeville, LA; granddaughter, Kristin Rault and grandson, Joshua Rault; sister Gloria Susan Hebert and husband Joe of Houston, TX; sister-in-law, Lillian Vrana of El Campo, TX; and numerous nieces and nephews. Preceded in death by her husband, Henry Vrana; daughter, Deborah Vrana; parents, Edward and Annie Maroul Susan; sister, Rose Susan Britton; father-in-law and mother-in-law, Frank and Josephine Leihardt Vrana; sister-in-law, RoseMary Vrana; and brothers-in-law Jerome, George, and Frank Vrana. Visitation will be held from 10:00 a.m. until service time at 11:00 a.m., Saturday, August 22, 2020 in the Chapel of Davis-Greenlawn Funeral Home in Rosenberg. Burial to follow at Greenlawn Memorial Park in Rosenberg. Pall Bearers will be Mark Hebert, David Britton, Richard Britton, Jeff Vrana, Richard Rault, and Steven Bychowski. Tributes and words of condolence may be left for the family at www.davisgreenlawnfh.com. Arrangements are under the direction of Davis-Greenlawn Funeral Home, 3900 B.F. Terry Blvd., Rosenberg, Texas 77471, Phone: 281-341-8800.

Genevieve "Genny" Adele Susan Vrana was called to eternal rest peacefully in her sleep on August 12, 2020. She was born on September 21, 1941 to Edward and Annie Susan in the little farm town of Guy, TX. Genny graduated from Needville High... View Obituary & Service Information

The family of Genevieve "Genny" Vrana created this Life Tributes page to make it easy to share your memories.

Send flowers to the Vrana family.