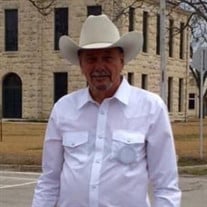 “William” Frederic Harrelson was born on September 24, 1940 in Rising Star, Texas to Ernest Edgar and Dollie Estelle Harrelson and went to be with the Lord on September 25, 2020. He was the youngest of four siblings, Donnie Mae, Buck Duane and Betty Lou Harrelson. “William” also known as Bill was married to Marta Merritt Harrelson September 6, 1961. He was preceded in death by his mother, father and three siblings. He is survived by his wife Marta of 59 years, son Dirk (Laura) Harrelson of Lake Charles, Louisiana, daughter Malae (David) Johse of Angleton, Texas and daughter Dehbrenda (Craig) Preuss of The Woodlands, Texas. He was the proud Papa to 12 grandchildren and 10 great grandchildren. Visitation will be held from 3:00 p.m. – 6:00 p.m., Wednesday, September 30, 2020 in the Chapel of Davis-Greenlawn Funeral Home in Rosenberg. A graveside service will be held at 3:00 p.m., Thursday, October 1, 2020 at Nimrod Cemetery in Rising Star, Texas. (Near Cisco, Texas). In lieu of flowers, for those wishing, please consider making a donation to the American Liver Foundation, NORD, Inc. – Donations, Dept. 5930, P.O. Box 4110, Woburn, MA 01888. Tributes and words of condolence may be left for the family at www.davisgreenlawnfh.com. Arrangements are under the direction of Davis-Greenlawn Funeral Home, 3900 B.F. Terry Blvd., Rosenberg, Texas 77471, Phone: 281-341-8800. EULOGY: “William” Frederic Valden Harrelson, also known as Bill, will be remembered as a loving husband, father and Papa. You never wondered where you stood with him and where you needed to stand with God. He was a faithful Christian above all things. He was always eager to help others and could fix anything whether it required a permit or not. Bill’s work ethic was above reproach. His expertise of mechanical and electrical systems provided him a 62-year career both domestic and international. His work led him to various countries and cultures allowing him the opportunity to spread God’s word to everyone he encountered. When asked when he would retire, his answer was “when they quit calling”. They never quit calling, the latest offer about a month ago. What was amazing was how many different areas he earned licenses and certifications, the latest at 79 years of age. He was in constant pursuit of biblical and technical knowledge. Bill’s goals pertaining to family was to raise strong, honest, upright Christian adults. Although, he was not baptized until mid-life, from that time forward his life and teaching was to live by God’s word. He enjoyed hunting, fishing, coaching softball, golf and spending time with family especially his grandchildren. He loved everyone and to know him is to love him.

&#8220;William&#8221; Frederic Harrelson was born on September 24, 1940 in Rising Star, Texas to Ernest Edgar and Dollie Estelle Harrelson and went to be with the Lord on September 25, 2020. He was the youngest of four siblings, Donnie Mae,... View Obituary & Service Information

The family of Frederic Valden Harrelson created this Life Tributes page to make it easy to share your memories.

Send flowers to the Harrelson family.