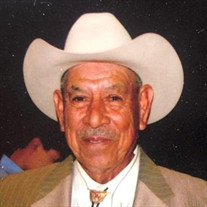 Francisco L. Silvas Sr., 87, passed away Monday, April 11, 2022 in Houston. He was born October 20, 1934 in Austwell to John C. Silvas and San Juana Lozano Silvas. Frank worked as a Ranch Hand in The Richmond area for many years. He was a... View Obituary & Service Information

The family of Francisco Lozano Silvas s created this Life Tributes page to make it easy to share your memories.

Send flowers to the Silvas family.