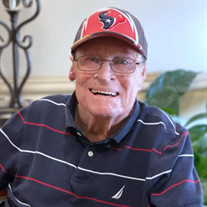 Ernest Gene Allen, 91, of Richmond, Texas passed away on May 9, 2022 in Southlake, Texas. He was born May 29, 1930 in Beaumont, Texas to Clifton and Jane Allen. Gene grew up in Beaumont where he graduated from South Park High School. After graduating high school, he joined the US Navy and honorably served in the Korean War where he was an Aviation Machinist Mate on the USS Valley Forge and USS Oriskany. After completing his service in 1954, Gene moved home to Beaumont where he met Rose Lucylle Bourgeois and they fell in love. Gene and Lucylle were married in August of 1957. They welcomed three daughters to their family, Leslie, Jackie and Jenny. Over the years, his name changed often. First, he was Gene, then Dad, then Pawpaw and with the birth of Jenny’s children, he became Sugar Pie. Gene was employed in Pipeline services at Tuboscope for 36 years. After his retirement from Tuboscope, he became a Park Supervisor for the City of Thompsons. He retired from Thompsons at the young age of 82. He loved being outside, working on the tractor and driving the mower. In 2014, Gene moved to the Dallas-Fort Worth area to be by his daughter, Jenny. Gene was a member of First United Methodist Church of Rosenberg and while living in Southlake, he attended services at Keller United Methodist Church. This loving father, grandfather, great-grandfather will truly be missed by his family and friends. In addition to his parents, Gene is preceded in death by his wife of 57 years, Rose Lucylle Allen and his sister, Delores Allen Jones. He is survived by his loving daughters: Leslie Rutland and husband Tim of Austin, Texas, Jackie Smith and husband Trey of Bloomington, IL, Jenny Smith and husband Toby of Keller, Texas. Grandchildren: Bonnie Fox and husband Dan, Katie Chancellor and husband Mike, Olivia Bartsch and husband Taylor, Victoria Smith and fiancee Matt Piarowski, Hannah Smith, Noah Smith, and Madelyn Smith. Great-Grandchildren: Dorian and Thaddeus Chancellor, Katharine and Matthew Fox. Along with many nieces and nephews and extended family and friends. Visitation will be held from 1:00 p.m. until service time at 2:00 p.m., Thursday, May 26, 2022 in the Chapel of Davis-Greenlawn Funeral Home in Rosenberg. Burial with military honors to follow at Greenlawn Memorial Park in Rosenberg. In lieu of flowers, please consider making a donation to Honor Flight, Inc., 1405 S. Fern Street# 702, Arlington, Virginia 22202. Tributes and words of condolence may be left for the family at www.davisgreenlawnfh.com. Arrangements are under the direction of Davis-Greenlawn Funeral Home, 3900 B.F. Terry Blvd. (Hwy 59 South @ FM 2218), Rosenberg, Texas 77471, Phone: 281-

Ernest Gene Allen, 91, of Richmond, Texas passed away on May 9, 2022 in Southlake, Texas. He was born May 29, 1930 in Beaumont, Texas to Clifton and Jane Allen. Gene grew up in Beaumont where he graduated from South Park High School. After... View Obituary & Service Information

The family of Ernest Gene Allen created this Life Tributes page to make it easy to share your memories.

Ernest Gene Allen, 91, of Richmond, Texas passed away on May...