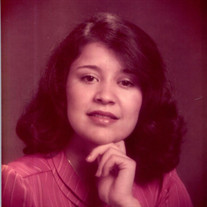 Elsa Rodriguez was born January 17, 1954 to Celso Rodriguez Jr. and Anita Rodriguez in Sugarland, Texas she was a loving daughter, sister, Aunt, friend, and to some of the oh so innocent great nieces referred to as Grandma when they were little. And although Elsa did not have any kids of her own, she treated her nieces, nephews, great nieces, and great nephews as her own. She was known for her feisty, quick witted, say what’s on her mind kind of personality. ` Elsa was the 4th born out of 8 kids. She grew up in Stafford Texas, she attended EA Jones Elementary, Dulles Middle School, and graduated from Dulles Highschool. She would later return to Dulles to work as a secretary and later went onto Pitney Bowes. She started in a secretarial pool and worked her way up the ranks to trouble shooter and eventually transferred to San Antonio where she was head of her department of over 65 staff. She had the opportunity to travel all over with work and sometimes had her sister in tow. After eventually relocating to Arizona for years, she returned home to Texas. Where she retired and was able to stop and enjoy life. She loved gardening, watching sports with her Big Bro Rudy, and spending time with her family after being gone for so many years. She was such a kindhearted person who would have done anything not only for her family but for anyone in need. We are going to miss her dearly. She is preceded in death by her parents, Celso and Anita Rodriguez; her brother Jaime Rodriguez, and sister-in-law Minnie Rodriguez. She is survived by her brother Rudy Rodriguez, her brother Manuel Rodriguez and his wife MaryAnn Rodriguez, her sister Celia Smith and her husband David Smith, her sister Lucinda Jaso and her husband Joe Jaso, her sister Rachel Drouin and her husband Greg Drouin, her brother Celso Rodriguez III, and her many nieces and nephews. In lieu of flowers please donate to American Diabetes foundation.

Elsa Rodriguez was born January 17, 1954 to Celso Rodriguez Jr. and Anita Rodriguez in Sugarland, Texas she was a loving daughter, sister, Aunt, friend, and to some of the oh so innocent great nieces referred to as Grandma when they were little.... View Obituary & Service Information

The family of Elsa Rodriguez created this Life Tributes page to make it easy to share your memories.

Send flowers to the Rodriguez family.