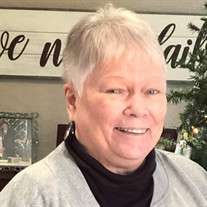 On January 13, 2021, Edna Jones left this Earth peacefully surrounded by family. Edna was born to Ben Tucker and Vada (Tucker) Hardy on September 21, 1936. She is preceded in death by her parents, her husband L.P. (Red) Jones and her sister Rebecca Hilbrich. Edna grew up in the Exxon Oil Field Camp in Thompson, Texas. She always said that she couldn’t imagine a better place to grow up. She attended Lamar High School where she met Red. They married in April of 1954 and had four children: Harley, Phyllis, Phillip and Laura. In the early 70s the family moved from Rosenberg to East Bernard where she lived for almost 30 years. During this time, she was an avid bowler - enjoying traveling around the U.S. to the National Bowling Tournaments with her friends. She was a volunteer EMT with the East Bernard EMS and worked disaster relief with the Red Cross. Edna also enjoyed throwing horseshoes and became one of the founding members of the Riverside Horseshoe club. Edna loved to travel, camp and play games. She enjoyed playing cards and dominos with the many friends that she made at the Regency Villas during the seven years that she lived in Schulenburg. She especially enjoyed playing Words with friends with her grandson Ben (Benji) Polak. Those that will carry on her memory are: son, Harley Jones and his wife Debbie, daughter Phyllis Knesek and husband Blake, son Phillip Jones and daughter Laura Kubena and her husband Joseph Kubena. Grandchildren: Ben Polak and wife Stacey, Chris Polak, Brian Jones, Kevin Jones, Adam Kubena and wife Michelle and Andrew Kubena. Great Grandchildren: Riley Polak, Randon Polak, Sydney Polak, Kierra Kubena, Eleanore Kubena, Lydia Kubena and her many friends from Regency Villas. For those wishing, please consider making a charitable donation to the American Red Cross. A graveside service will be held at Greenlawn Cemetery on Monday, January 18, 2021 at 10:00 am. Words of condolence may be left for the family at www.davisgreenlawnfh.com Arrangements are under the direction of Davis-Greenlawn Funeral Home, 3900 B.F. Terry Blvd., Rosenberg, Texas 77471, Phone: 281-341-8800.

On January 13, 2021, Edna Jones left this Earth peacefully surrounded by family. Edna was born to Ben Tucker and Vada (Tucker) Hardy on September 21, 1936. She is preceded in death by her parents, her husband L.P. (Red) Jones and her sister... View Obituary & Service Information

The family of Edna Tucker Jones created this Life Tributes page to make it easy to share your memories.

Send flowers to the Jones family.