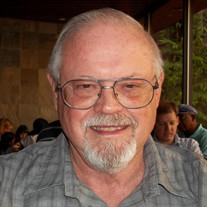 Earl Ross Lawler, Jr. Born July 22, 1940 in Luling, Texas. Deceased March 28, 2022 in Missouri City, Texas. Preceded in death by parents Earl Ross Lawler, Sr and Maple Lois Lawler (Garner) and also one brother, Dale Walton Lawler and beloved wife Frances Marie Lawler (Beaugrand). Survived by two sisters, Mildred Scott and Linda Lawler; three children, Mark Lawler, Alaina Robinson and Stacy Woyton; as well as eight grandchildren and two great-grandchildren. After graduating from Thomas Edison High School in San Antonio, he earned a scholarship to St. Mary’s University and received his Bachelor of Science in Physics. His life-long love of electronics led him to the hobby of Amateur Radio and the call sign W5HFF; much to the bemusement of his father who had had his call sign much longer but was W5JLY. Earl served his country first in the United States Air Force and then in the Texas Air National Guard when the squadron was transferred to that branch. He maintained aircraft intercept radars on fighters that patrolled the southern approach to our nation. While at St. Mary’s, he met the future Mrs. Lawler, who had moved to the warmer climate from Michigan. He knew she was “The One” when she told him how much she loved Mexican food. Their marriage resulted in first a son in 1965 and then unexpected twin daughters in 1968. Having moved to Austin shortly before the birth of the twins, Earl went to work for a company that manufactured focused electron beam emitters used in the vacuum deposition of metal layers for the production of semi-conductor circuits and other applications. However, the growth of the oil industry in Houston brought the family to the area in 1976. Settled on a one acre plot in Rosenberg, they started with four walls and a roof and put down roots into the community. Children in schools and various extracurricular activities kept everyone busy. His work for various oil exploration companies was the installation and maintenance of electrical, electronic and communication systems aboard drilling platforms and ships. This began as one week on - one week off assignments in the Gulf of Mexico but grew to longer and farther jobs as his expertise was rewarded. Soon he was going to such places as Japan, Singapore, Hong Kong, Perth, Australia and Revenna, Italy. However, he never forgot his most important job of husband and father. The long times away were offset by equal time at home during which he and the family built the home they lived in. He continued his employment well past retirement age in order to maintain health coverage for his ailing wife. He was also the spiritual leader of the family by setting an example of faith through works for the church such as song leader, teacher and Eldership. His trust in God never wavered even during the dark days of the loss of his wife. His family will remember him warmly as a truly Godly man. For those whishing, donations made be made to: Foster's Home For Children in Stephenville, Tx (https://nam10.safelinks.protection.outlook.com/?url=https%3A%2F%2Flinkprotect.cudasvc.com%2Furl%3Fa%3Dhttps%253a%252f%252fwww.fostershome.org%26c%3DE%2C1%2CQOxegUT5qeLd0ulC0fxR2ZzY0UNbYyzzw2Eb8r6HO1RWMtwUFZrYW2u-ANRusamdAetpPUL3Bu9w7fmBGeKs0xfSLZHDGcWtiGqtzq_dxK8kY6Hqt6f0D7w%2C%26typo%3D1&data=04%7C01%7Cdavisgreenlawn%40missionparks.com%7C137f3a7a367e4c466d6c08da1273cec1%7C960df643729d4d02a392824ac41d3a09%7C0%7C0%7C637842585966680298%7CUnknown%7CTWFpbGZsb3d8eyJWIjoiMC4wLjAwMDAiLCJQIjoiV2luMzIiLCJBTiI6Ik1haWwiLCJXVCI6Mn0%3D%7C3000&sdata=vzoDSZ8ERz0mzP3ffCLb0omu%2FP2K2LQQJKB6p1svU4o%3D&reserved=0) or New Mexico Christian Children's Home (https://nam10.safelinks.protection.outlook.com/?url=https%3A%2F%2Flinkprotect.cudasvc.com%2Furl%3Fa%3Dhttps%253a%252f%252fwww.nmcch.org%26c%3DE%2C1%2CyEa-xOEpOy6RrcNG7jpnfZ9M_RkfwekwRdeUNdinwHeJGFg7PlLTofRZZWEzgst5_O3mRfWk3PkHiqVycB68XowHB-Sx6sIhLzL_yTK2%26typo%3D1&data=04%7C01%7Cdavisgreenlawn%40missionparks.com%7C137f3a7a367e4c466d6c08da1273cec1%7C960df643729d4d02a392824ac41d3a09%7C0%7C0%7C637842585966680298%7CUnknown%7CTWFpbGZsb3d8eyJWIjoiMC4wLjAwMDAiLCJQIjoiV2luMzIiLCJBTiI6Ik1haWwiLCJXVCI6Mn0%3D%7C3000&sdata=Uxn4fwwhKHEjthenrBrW%2BN69y7mUxzNYqSgsB2y9HQI%3D&reserved=0)

The family of Earl Ross Lawler, Jr. created this Life Tributes page to make it easy to share your memories.