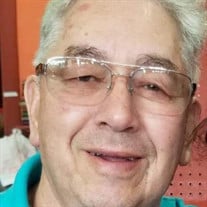 Elvis Doyle Williams, known by everyone as Doyle, after 72 years full of life and love, went to be with our Lord on January 1, 2021. Doyle was born on September 18, 1948, in Lufkin, Texas, the third child of Elvis and Maria, and younger brother to two feisty older sisters. The son of an Air Force MSGT, Doyle was fortunate to live in many places around the US and the world, including New Mexico, California, and Germany after WWII. His parents eventually ended up settling in Texas, and Doyle graduated from Dulles High School in Sugar Land. After a year of community college, Doyle became a machinist, and, around this time he met Theresa, his first wife, and they had two children, a girl and a boy. Family life included softball and baseball—Doyle played softball with a church league, school events, family gatherings, and many memorable family road trips, including to New Mexico, Biloxi, and Disney World. One of the best family purchases was a pop up camper! After a series of layoffs he decided to pursue a career as a plumber. One of the proudest family moments was when he obtained his Master Plumber license. Plumbing would be his career in some form or fashion for the rest of his life, first as the owner of his own plumbing company, and then as an employee of Home Depot for 23 years. Doyle was a fixture at Home Depot, and both coworkers and customers appreciated his work ethic, kindness, and sense of humor. Doyle made a lot of people smile. If there is one thing that you can say about Doyle, it is that Doyle was always Doyle. Whether you knew him fifty years ago, or you met him six months ago, he was the same kindhearted, soft-spoken, but personable, person. He was just a nice guy. And though he was quiet, he could talk up a storm! Unlike most people who change over the years, you could count on Doyle to be an anchor—always the same person. He did not need to change, because he was good “as is”. Over the years Doyle enjoyed time with friends and family (and a variety of dogs), fishing, road trips, camping, live band performances at home parties, Saturday night dancing, long weekends at Lake Livingston at his mother’s house (some say he was his mom’s favorite child since she was known to always make sure that he had a warm breakfast or hot lunch upon arrival), scratch off lotto tickets, occasionally rocking out to Jimi Hendrix, and spending time with his grandkids. Mostly he just liked to laugh at funny stories. Later in life, Doyle met Minnie Ramos in September of 2007, and she brought him a lot of joy. They married on September 13, 2013. Together they enjoyed many years of eating out at restaurants, traveling to casinos (sometimes with Doyle’s mom), road trips, sharing memories, and lots of love and laughter with family and friends. She will miss him immensely. Doyle was preceded in death by his first wife, Theresa Blinka Peikert, by his father, Elvis Williams, by his mother Maria Williams, and by his sister, Jeannene Myers. Doyle is survived by his wife, Minnie Ramos, and his legacy lives on through his daughter, Julie (Williams) O’Sullivan (Paul), and his grandson, Ivan, who adored him, and through his son, Jeff Williams (Gloria), and grandsons, Tanner, Sebastian, Geoffrey, Bryce, and Mateo. His loss is also deeply felt by his stepchildren, Juan R. Ramos and April Ramos, and his beautiful granddaughters, Kayla Nachesky, Cyan Nachesky, and Nevaeh Guerrero. Doyle will also be sorely missed by his sister, Maurine Holecek (Joseph), of Baytown, and many cousins, nieces, and nephews. The family will welcome friends at a viewing on Friday, January 8, in the Davis Greenlawn Chapel at 3900 B.F. Terry Boulevard, Rosenberg, Texas, 77471, from 2-6pm. The funeral home is limited to 50 people or less and everyone must provide a facial covering. In lieu of flowers, memorial donations can be made to the American Diabetes Association.

Elvis Doyle Williams, known by everyone as Doyle, after 72 years full of life and love, went to be with our Lord on January 1, 2021. Doyle was born on September 18, 1948, in Lufkin, Texas, the third child of Elvis and Maria, and younger brother... View Obituary & Service Information

The family of Doyle Williams created this Life Tributes page to make it easy to share your memories.

Elvis Doyle Williams, known by everyone as Doyle, after 72 years...

Send flowers to the Williams family.