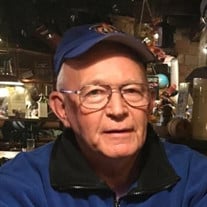 Dean L Henning, 79, passed away on January 15, 2021. He was born on November 5, 1941 in Smith Center, Kansas. He graduated from Kansas State in 1964 and taught vocational auto mechanics in Raytown, Missouri before joining the U.S,. Army in 1966. He was stationed at Fort Rucker, Alabama prior to going to Seoul, Korea. Dean moved to Houston Texas in 1969 after completing his military service. He worked in research and development for Shell Global Solutions for 35 years. After retiring from Shell he worked for VIV Solutions for several years. Dean Henning contributed to over 30 patents and was part of a group named to the Technology Hall of Fame, Subsea Technology in 2019. He had a passion for agriculture to include pecan and fruit trees. He is proceeded in death by his parents, August and Maxine Henning, and his son, Trevor. He is survived by his wife of 55 years, Linda Henning; his daughter Moria Henning; sister Lelah Henning; brother Wayne Henning; brother Earl Henning and his wife Linda Henning as well as other loving family members and friends. In lieu of flowers, donations may be made to New Covenant Fellowship Church 1412 Brazos St, Rosenberg, TX 77471, (281) 341-0303 or https://liverfoundation.org/. A graveside service will be held at 11:00 a.m., Saturday, January 23, 2021 at Greenlawn Memorial Park. We respectfully ask that facial coverings be worn and that everyone in attendance practice social distancing protocols. Words of condolence may be left for the family at www.davisgreenlawnfh.com Arrangements are under the direction of Davis-Greenlawn Funeral Home, 3900 B.F. Terry Blvd., Rosenberg, Texas 77471, Phone: 281-341-8800.

Dean L Henning, 79, passed away on January 15, 2021. He was born on November 5, 1941 in Smith Center, Kansas. He graduated from Kansas State in 1964 and taught vocational auto mechanics in Raytown, Missouri before joining the U.S,. Army in 1966.... View Obituary & Service Information

The family of Dean L. Henning created this Life Tributes page to make it easy to share your memories.

Send flowers to the Henning family.