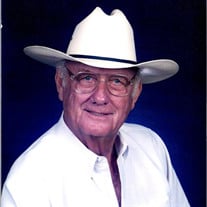 Clinton W. Conrad, 90 of Beasley, Texas passed away peacefully September 12, 2021 at Methodist Hospital in Sugar Land, Texas. He was born on September 7, 1931 in Hallettsville, Texas to Willie and Hilda Koehn Conrad. Clinton proudly served his country in the US Navy as a Seaman 3rd Division on the Lake Champlain CV 39 aircraft carrier from 1951 to 1955. He was a member of the First Baptist church in Beasley and a retired deacon. He worked for the U.S. Department of Agriculture for over 30 years retiring in 1994. From there, Clinton worked for the State of Texas/Ducks Unlimited for 10 years. In his early years he farmed cotton and milo in the Beasley area. Clinton was a cattle rancher for many years of his life and enjoyed spending time at the farm in Hallettsville. He enjoyed working in the yard, sitting on the porch, playing dominoes, listening to music and being surrounded by family. Clinton never met a stranger and always had a smile on his face. Clinton is preceded in death by his parents Willie and Hilda Koehn Conrad and sister in law Delia Conrad. Survivors include his wife of 68 years, Jo Ann Conrad; daughters Karen Conrad of Rosenberg and Kimberley Hull and husband Jack T. Hull of Beasley; grandchildren Matthew Tiemann and wife Misty Tiemann, Clinton J. Hill, Jonathan Hull, Ashley Watson and husband Steve and Colton Eaker; great grandchildren Kaitlynn Tiemann, Keith Tiemann and Bailey Hill; brothers Roland Conrad and wife Carloyn of Needville; Danny Conrad of Rosenberg; along with a host of family and friends. The family would like to give special thanks to the nursing staff of the Main 5th floor at Methodist Sugar Land Hospital and to his doctors Michael Raizner and Bhadresh Shah for their excellent and kind care. Hallettsville and the Shiloh community were a huge part of Clinton’s life. He was born and raised there and ranched cattle right down the road from their old homestead. In lieu of flowers, donations may be made in Clinton’s name for a memorial bench at the community center. Shiloh Community Center, ℅ Ruth Muerh 1657 CR 136 Hallettsville, Texas 77964. Visitation will be held from 1:00 p.m. until service time at 2:00 p.m., Monday, September 20, 2021 in the Chapel of Davis-Greenlawn Funeral Home in Rosenberg. Burial with military honors to follow at Greenlawn Memorial Park in Rosenberg. Tributes and words of condolence may be left for the family at www.davisgreenlawnfh.com. Arrangements are under the direction of Davis-Greenlawn Funeral Home, 3900 B. F. Terry Blvd., Rosenberg, Texas 77471, Phone: 281-341-8800.

The family of Clinton W. Conrad created this Life Tributes page to make it easy to share your memories.

Send flowers to the Conrad family.