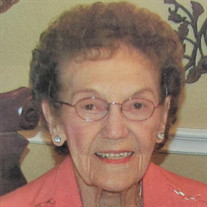 On Monday, May 3, 2021, Clara Ella Ricklefsen, 95 years, passed away in Round Rock, Texas. She was born to Anton Poncik and Ann Evanicky Poncik on Tuesday, March 23, 1926 in Rosenberg, Texas. She grew up on a farm and attended school at Rabbs Prairie, Texas. On September 15, 1941, in Giddings, Texas, Clara married Milton B Ricklefsen and lived in Houston, Texas. After the birth of their first son, Robert (Bob) Clyde Ricklefsen in Houston, they moved to Rosenberg, where their second son, Lawrence (Larry) Wayne Ricklefsen, was born. In 1950, Clara and Milton joined the Sacred Heart Catholic Church in Richmond and for 59 years she was a faithful and devoted member. She was a member of St. Mary Margret Society, the Altar Society and 50 Plus Club. She was responsible for assignments of the “Adoration of the Blessed Sacrament” on the first Friday of the month for many years. Clara believed in pray, meditation and saying the Rosary. She loved God and took many of life’s trying times to Him in prayer. She also participated in prayer devotionals at the Perpetual Adoration Chapel every Friday at the Holy Rosary Catholic Church in Rosenberg from the opening of the chapel until her move to Sun City in 2009. Clara became a parishioner of the St. Helen Catholic Church in Georgetown, a member of The Church Senior Group, participated in several Women’s Bible Study Groups, and offered prayers in the St. Helen’s Adoration Chapel weekly. After moving to Cedar Park, she jointed St. Margaret Mary Catholic Church. Clara continued her walk with the Lord through TV masses, her rosary and televised worship from Hill Country Bible Church with her son and daughter-in-law. She grew in her belief and was special to many in her journey of life. In the community, Clara participated in several clubs and organizations including: The Rosenberg Bowling League, the Rosenberg Little League, Boy Scouts of America, PTA, and the Lamar Mustang Booster Club. She was always involved in various sporting events with her sons. After living in Rosenberg, she moved to Sun City and later to Cedar Park to live with her son and family. Clara was preceded in death by her loving husband of 57 years, Milton; her son, Larry; her father and mother, Anton and Anne Poncik; sister and husband, Elsie and Chester Bailey; nephew, David Bailey; niece, Carol Bailey Lorenz; and infant great-granddaughter, Ariel Lynn Ricklefsen. She is survived by her son, Bob Ricklefsen and wife, Diane, of Cedar Park; two grandsons, Troy Ricklefsen and his wife, Rebecca, great-grandchildren, Joel and Hope of Cedar Park; Neil Ricklefsen of Cedar Park , two great-granddaughters, Mary and Stella of Leader; granddaughter, Kristin and husband, Travis Dedek, two great-grandchildren, Hayden and Holden of Fulshear; daughter-in-law, Sheila Ricklefsen, Larry’s wife, and step-granddaughter, Tia and husband, Jeff Baker, two step-great-grandchildren, Kevin and Olivia of The Meadows; and other extended family members and friends. On Thursday, May 13, 2021 visitation will begin at 10:00 AM, rosary at 10:30 AM, and Mass will follow at 11:00 AM officiated by Father Joseph Ho at the Sacred Heart Catholic Church in Richmond. Then interment services will be held at the Davis-Greenlawn Cemetery in Rosenberg. Tributes and words of condolence may be left for the family at www.davisgreenlawnfh.com. Arrangements are under the direction of Davis-Greenlawn Funeral Home, 3900 B.F. Terry Blvd., Rosenberg, Texas 77471, Phone: 281-341-8800.

On Monday, May 3, 2021, Clara Ella Ricklefsen, 95 years, passed away in Round Rock, Texas. She was born to Anton Poncik and Ann Evanicky Poncik on Tuesday, March 23, 1926 in Rosenberg, Texas. She grew up on a farm and attended school at Rabbs... View Obituary & Service Information

The family of Clara Evanicky Ricklefsen created this Life Tributes page to make it easy to share your memories.

Send flowers to the Ricklefsen family.