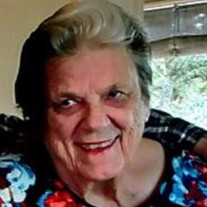 Carolyn Louise Conrad of Needville, TX, passed peacefully on June 18, 2022. She was born in Needville, TX on September 26, 1935, to Natalie Louise Kneitz and Clarence “Bubba” Gregory. She was preceded in death by her parents and her brothers Ronald Gregory and Joseph Gregory. She is survived by her husband, Roland Conrad; her son Russell “Rusty” Conrad; daughter-in-law, Debbie Conrad; her grand-daughter, Kathryn Conrad; her brother M.C. Gregory and his wife Alice Gregory plus many nieces, nephews, and cousins; along with her life-long best friends, Shirley Teykl and Roxy Graeber and their families. She graduated from Needville High School. She had a passion for sports, specifically softball and volleyball. She was a member of the 1956 US Volleyball Team and competed internationally at the World Tournament in Paris France representing the US Volleyball Association before volleyball was an Olympic sport. She was a six-time All-American and named Woman Volleyball Player of the Year in 1956 and is in the Helms Athletic Foundation Volleyball Hall of Fame. She was an avid reader and loved her Texas Lottery scratch-off tickets. Carolyn met the love of her life, Roland Conrad and they were high school sweethearts at Needville High School. They wed on August 16, 1957. She attended the University of Houston and graduated in 1965 with a bachelor’s degree in science. They adopted their son, Rusty in 1969 when she took time away from teaching to be a stay-at-home mom. She returned to teaching seven years later and taught biology, world geography and government at her Alma Mater Needville High School until she retired. She often spoke of her former students. She was pleased and content knowing that her students learned from her teachings, and she was able to contribute in small ways to the success in their lives. She was a very direct, determined, and a strong woman. She overcame colon cancer in 2013 but succumb to secondary liver cancer. We would like to thank the staff with Vantage Hospice and the staff at SPJST in Needville, TX. Carolyn will be deeply missed by her family, friends, and neighbors. Pall Bearers are Tim Teykl, Craig Teykl, Jason Gregory, Justin Gregory, Bubba Bennett, and Leroy Stavinoha. Visitation will be on Wednesday, June 22, 2022, from 4pm to 8pm at Davis Greenlawn Funeral Home at 3900 B.F. Terry Blvd., Rosenberg, TX 77471. Services will be held at Immanuel Evangelical Church, 9018 Church Street, Needville, TX 77461 on Thursday, June 23, 2022 at 2pm and will conclude with burial at Immanuel Evangelical Church Cemetery at 14919-14889 FM1236, Needville, TX 77461; with a reception following the burial at the Immanuel Evangelical Church Hall. In lieu of flowers, please donate to: Needville Athletic Booster Club, in honor of Carolyn Conrad, PO Box 892, Needville, TX 77461-0892.

Carolyn Louise Conrad of Needville, TX, passed peacefully on June 18, 2022. She was born in Needville, TX on September 26, 1935, to Natalie Louise Kneitz and Clarence &#8220;Bubba&#8221; Gregory. She was preceded in death by her parents and... View Obituary & Service Information

The family of Carolyn Louise Conrad created this Life Tributes page to make it easy to share your memories.

Send flowers to the Conrad family.