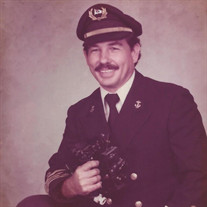 Joe Gordon Grace of Richmond, Texas was received into the arms of our Lord and Savior Jesus Christ and crossed the bar on September 2, 2021. Born on February 24, 1936, in Patroon, Texas to Harper and Cecil Grace. He was preceded in death by his parents, brother, Colonel Judd Grace, and sister, Cora Faye Grace. Joe graduated from the U.S. Merchant Marine Academy at Kings Point, New York in 1958. Following graduation, Captain Grace sailed a lengthy time on merchant vessels in all officer capacities, up to, and including ship master at the age of 30. He was recognized by his alma mater as an honor graduate for having obtained the rank of ship master and for Outstanding Professional Achievement. After eleven years at sea, he formed a marine surveying company in Houston. He was well known throughout the Port of Houston as someone with a trustworthy reputation. During those 32 years, he became known as the leading expert witness in the maritime field appearing in state, federal, and international courts. He was an active member of Westbury Baptist Church, serving as a Sunday school teacher for men and boys, and served as a deacon. He was a 32nd degree mason. He was a published poet, authored over 700 poems and received several awards. Joe loved being with family and friends. He was an avid reader of military history, Shakespeare, and classical Irish poetry. He was a prolific storyteller, known far and wide for his wit and humor. He made everyone around him feel loved and had a keen ability to work a room and leave an impact with every single person. He is survived by the love of his life of 56 years, Gail Grace, affectionately known as Gigi; son Joe Grace II and wife Michelle, daughter Melissa Markus and husband Bill. Grandchildren Sarah Jewell, Joe Grace III (Trey) and wife Sydney, Kayla Sullivan and husband Johnny, Emmy Brown and husband Justin, Tristan Grace, and Chad Alexander. Great Grandchildren Cameron, Penny, John, and Louie. A celebration of life will take place Saturday, September 11th, 1pm at Westbury Baptist Church, 10425 Hillcroft Street Houston, Texas with pastor Brandon Webb officiating. Fond memories and expressions of sympathy may be shared at www.davisgreenlawnFH.com for the Grace Family.

Joe Gordon Grace of Richmond, Texas was received into the arms of our Lord and Savior Jesus Christ and crossed the bar on September 2, 2021. Born on February 24, 1936, in Patroon, Texas to Harper and Cecil Grace. He was preceded in death by... View Obituary & Service Information

The family of Captain Joe G. Grace created this Life Tributes page to make it easy to share your memories.

Joe Gordon Grace of Richmond, Texas was received into the arms...

Send flowers to the Grace family.