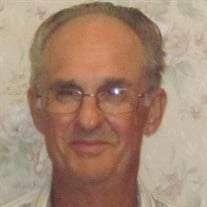 Services for Calvin Charles Mahlmann, 80, of Wharton will be held on Tuesday, April 12, 2022, at 2pm at the First Presbyterian Church in Wharton with the Reverends Debbie Cenko and Charles Teykl officiating. Interment will follow at Davis Greenlawn in Rosenberg with military honors. Calvin Charles Mahlmann was born August 16, 1941, in Richmond, Texas to John and Elsie Mahlmann. Being the only son of four siblings, Calvin enjoyed working on the family cotton and milo farm in Damon with his dad. In addition to farming, Calvin mastered many skills, including woodworking, welding, plumbing, electrical, carpentry, equipment and engine repair that he would use throughout his lifetime. He graduated from Needville High School in 1959 and then attended Wharton County Junior College. It was during this time that he met his future bride, Mary Frances Starustka of Richmond, on a blind date. After graduating from Sam Houston State University with an agronomy degree, his dad gave them permission to marry once the cotton-picking season was complete. They married on October 10, 1964, in the First Presbyterian Church in Rosenberg. With the draft activated for the Vietnam War, Calvin joined the United States Air Force on January 3, 1966. He was assigned to Clark Air Force Base in the Philippines and completed one tour in Vietnam. Once stateside, he served with the 866th Radar Squadron in Tonopah, Nevada before being honorably discharged in May of 1969. Returning to Fort Bend County, Calvin worked for 30 years at Houston Lighting & Power, W.A. Parish Plant as an Instrument & Control Technician while also continuing to help his parents on the farm. Calvin was happiest when he was outdoors. He was always in his shed, tinkering on his tractors or working on a new project. Often saying that he was born with a hoe in his hand, he dearly loved tending to his vegetable gardens along with his fruit and pecan trees. He would intentionally overplant so he would have the opportunity to share with others. It was also not uncommon for him to collect and plant acorns, waiting patiently for them to grow over the years. Also, during the spring and summer evenings, he enjoyed watching the purple martins take advantage of the houses he put up. For many years, Calvin enjoyed being a member of the Houston Classic Chevy Club. Being so proud of his 1957 Chevy Bel-Air, 2-door hardtop, he and Mary would join in on car cruises across the state as well as enter various car shows. He was also a life-long member of the Vietnam Veterans Association, recently being a member of the El Campo Chapter 1069. Calvin’s faith was first and foremost, followed by his love of family. Being a member of the First Presbyterian Church in Rosenberg, and then later a member of First in Wharton, he served in multiple capacities, including Elder, Deacon and Trustee. Further, he would quietly tend to the needs of the church grounds, including mowing, shredding, and general maintenance. At home, he led by example, attending church each Sunday as well as leading the family in prayer before each meal. Calvin passed away Saturday, April 2, 2022, in Houston. He led a full and long life as a devoted husband, father and grandfather. He is survived by his wife of 57 years, Mary Frances Starustka Mahlmann; sister, Delores Mahlmann Bain of Needville; his daughters: Jennifer Lynn Jeffery and her husband, David of Garwood and Adriane Lynette Vanzo and her husband, Michael of La Vernia. He is also survived by his grandchildren: Allen William Jeffery of Lubbock; Elizabeth Leigh Jeffery of Garwood; Anthony August Vanzo and Jonathan Michael Vanzo of La Vernia. He is preceded in death by his parents, John and Elsie Mahlmann; his sisters, Carolyn Freeman and Vera Parcell; brother-in-law Jimmy Bain; and nephew, Chris Parcell. Pallbearers are Bob Riley, Bruce Dornak, David Jeffery, Allen Jeffery, Anthony Vanzo and Jonathan Vanzo. Visitation will be 5:00 – 7:00 pm, Monday, April 11th at Davis Greenlawn Funeral Chapel, 3900 B.F. Terry Blvd., Rosenberg. Memorials may be given to First Presbyterian Church of Wharton, 1602 John Knox Street, Wharton, Texas, 77488 or Presbyterian Children’s Homes and Services, P.O. Box 140888, Austin, Texas, 78714-9981. Tributes and words of condolence may be left for the family at www.davisgreenlawnfh.com. Arrangements under the direction of Davis-Greenlawn Funeral Home, 3900 B.F. Terry Blvd., Rosenberg, Texas 77471, Phone: 281-341-8800.

Services for Calvin Charles Mahlmann, 80, of Wharton will be held on Tuesday, April 12, 2022, at 2pm at the First Presbyterian Church in Wharton with the Reverends Debbie Cenko and Charles Teykl officiating. Interment will follow at Davis Greenlawn... View Obituary & Service Information

The family of Calvin Charles Mahlmann created this Life Tributes page to make it easy to share your memories.

Services for Calvin Charles Mahlmann, 80, of Wharton will be...

Send flowers to the Mahlmann family.