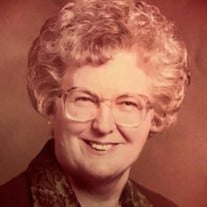 Betty Louise Roberts, 93, in the home that she shared with her beloved husband of over 65 years, passed peacefully into the presence of the Lord during the early hours of Saturday, October 02, 2021, after a brave battle with cancer. She will be remembered, first, as a loving wife, and, always, as a caring mother, grandmother, and great-grandmother. She will be missed dearly. Betty was born on December 1, 1927, in Missouri City, Kansas, to the loving union of Albert Leonard Fluke and Mabel (Bantock) Fluke. The middle sibling of two other brothers, Gene and Bobby Fluke. Soon after her loving husband, the boy next door, returned to his hometown of Waco after service to his country, she was married with Leonard William Roberts, on August 29, 1947. The newlyweds soon moved to Pasadena, Texas, and blessed with three children, Bill, Jim, and Cathy, all of whom would be near to her, physically and emotionally, in her final days. Upon her husbands retirement from Shell, they relocated to Fulshear, Texas, to be close to family members. While in Fulshear, they became faithful members of the Graeber Road Church of Christ. In her words; “My goal in this life, to be a loving christian wife, one that supported my husband and told him in every way that I loved him. To raise good, well-adjusted children, having the best qualities of their father and myself, Finally I wanted my children to know God and seek his guidance daily.” Her many personal accomplishments during her life were; daughter, wife, mother and keeper of the house, school librarian, receiving a Life Time Membership in the PTA, receiving Sunday School Teacher of the Year, and becoming accomplished in the arts and crafts (oil painting and needlepoint) and poetry writing. She is survived by their three children, and the legacy of their lives together: son, Albert William (Bill) Roberts of Sargent, Texas; son, James (Jim) Steven Roberts and daughter-in-law Alesia of Fredericksburg, Texas; and, daughter Cathrine Sue (Roberts) Walker, and son-in-law Carl Walker of Katy, Texas. She is also survived by six loving grandchildren: through Bill, Robby Breshears and Christy Roberts; through Jim, Ryan and Travis Roberts; and, through Cathy, Jason and Holly Walker. Betty was also doted with numerous great grandchildren. The family extends its loving gratitude to the numerous friends and neighbors for their thoughts, prayers and support so helpful in making her memories on this earth fulfilled. We also extend our warm thanks to the team of care-givers that ensured her comforts during the final days, becoming a friend to her and family.

Betty Louise Roberts, 93, in the home that she shared with her beloved husband of over 65 years, passed peacefully into the presence of the Lord during the early hours of Saturday, October 02, 2021, after a brave battle with cancer. She will... View Obituary & Service Information

The family of Betty Louise Roberts created this Life Tributes page to make it easy to share your memories.

Betty Louise Roberts, 93, in the home that she shared with her...

Send flowers to the Roberts family.