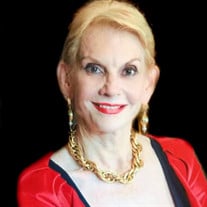 ***WEATHER UPDATE: Due to the forecasted weather, we will be pushing the service start time to 11:00 a.m.*** Beth Francis Butler, 83, of Fort Bend County passed away Wednesday, January 26, 2022, in her home. She was born in Houston, Texas on September 13, 1938, and was raised in Rosenberg, Texas. She was a resident of Fort Bend County for most of her life and spent some time in Aransas Pass, Texas for many years. Beth did countless hours of volunteer work at Polly Ryon Hospital, The BFB Charitable Foundation, Fort Bend County Country Club, Calvary Episcopal Church, and many animal shelters across Texas including her own private shelter. She worked many years with Special Needs Children at Lamar Consolidated Independent School District, and at the local State School in Richmond, Texas. In her early twenties she was a Fashion Model which she appeared on several local television stations. She was a local business owner, along with writing and publishing two poetry books, “I Don’t Fly With the Flock” and “Simple But Deep”. She was preceded by grandparents, Lizzie and Picket Butler; grandmother, Mayde Cox; grandparents, C.H. and Olive Waddell; parents Mayde Waddell Butler and Francis Butler; brother Rhett Butler. Beth is survived by her daughter, Elizabeth Cole Vogelsang of Richmond, Texas; son and daughter-in-law David Waddell and Renee Vogelsang of Richmond, Texas; son Paul George Vogelsang III of Richmond, Texas; brother and sister-in-law, Bill and Ann Butler of Fort Bend County; granddaughter, Eden Alexandra Marie (Beauty) Vogelsang; Step-daughter and son-in law, Melanie and Kevin Lawrence; and numerous step grandchildren and great grandchildren. Beth was a passionate woman who loved to help anyone at anytime. Her pride and joy were watching her granddaughter perform with dance, gymnastics, and cheer. She loved riding horses, some which she competed on, along with coaching and announcing at Lamar Little League ball games through the years. She loved animals and helped rescue many over the years. She is deeply loved and will be missed by all that knew her. Pallbearers will be Dr. Stephen Farrell, John (Tommy) Jakubic, Grant Roane, Bill Williams, Mike Hail, Emmett Clack, and Gregory Grant. Family will receive friends from 6pm to 8pm, February 3, 2022, at Davis Greenlawn Funeral Chapels and Cemeteries, 3900 B.F. Terry Blvd, Rosenberg, TX 77471. Funeral Services will be 11 am February 4, 2022, at Calvary Episcopal Church, 806 Thompson Road, Richmond, TX 77469. In lieu of flowers family is asking for donations in memory of Beth Francis Butler to be made to Fort Bend Paws, www.fortbendpaws.org and/or Combined Arms in association with Texas Veterans Network, www.combinedarms.us .

***WEATHER UPDATE: Due to the forecasted weather, we will be pushing the service start time to 11:00 a.m.*** Beth Francis Butler, 83, of Fort Bend County passed away Wednesday, January 26, 2022, in her home. She was born in Houston, Texas... View Obituary & Service Information

The family of Beth Francis Butler created this Life Tributes page to make it easy to share your memories.

***WEATHER UPDATE: Due to the forecasted weather, we will be...

Send flowers to the Butler family.