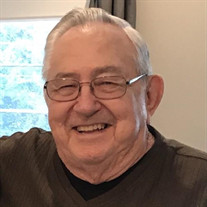 Benjamin Ruben Chupik passed from this life, Thursday, April 22, 2021 at the age of 87. Born, September 23, 1933 in Rosenberg, Texas to loving parents, Robert Frank and Blanch Matilda Horak Chupik. He is survived by his only child and son-in-law, Mark Alan Chupik and Joseph Seferian of Houston, Texas and a host of other loving family and friends. Ben is preceded in death by his parents, his two sisters; Eleanor Helena Squires, Vlasta Martha Talasek, two brothers; Albert William Chupik, Daniel Frank Chupik, and his loving wife of 44 years, Johnnie Colleen “Lucy” Morris Chupik. Ben’s story began in Rosenberg, Texas where he attended Lamar High School, was a star athlete (lettering in track, basketball and football) and affectionately referred to as “Choo Choo Chupik.” He met the love of his life, “Lucy” Morris, on a football practice field and vowed to marry her. They wed in 1954. He served his country in the U.S. Army, worked as a machinist at WKM in Sugar Land, A volunteer and full-time fire fighter for the city of Rosenberg, an electrician for Urbish Electric and Project Superintendent for Morrison Knudsen, Peter Kiewit Sons’ in Alaska and Saudi Arabia. He “retired” to pursue his true love (and former weekend hobby) of shrimping in Matagorda. He was an avid hunter, fisherman and Yahtzee/card/domino player. Ben was a loving and devoted Father and Husband who persevered relentlessly through the challenges of life, never losing faith in the Lord. A celebration of Ben’s life will be held Wednesday, April 28, 2021 at 4:00 p.m. at The Community Christian Church, 5220 Reading Road, Rosenberg, Texas 77471. For those wishing, in lieu of flowers, please consider making a donation to The Community Christian Church in Rosenberg. Tributes and words of condolence may be left for the family at www.davisgreenlawnfh.com. Arrangements are under the direction of Davis-Greenlawn Funeral Home, 3900 B.F. Terry Blvd., Rosenberg, Texas 77471, Phone: 281-341-8800.

Benjamin Ruben Chupik passed from this life, Thursday, April 22, 2021 at the age of 87. Born, September 23, 1933 in Rosenberg, Texas to loving parents, Robert Frank and Blanch Matilda Horak Chupik. He is survived by his only child and son-in-law,... View Obituary & Service Information

The family of Benjamin Ruben Chupik created this Life Tributes page to make it easy to share your memories.

Send flowers to the Chupik family.