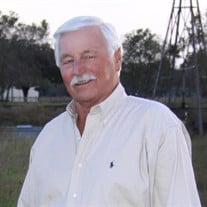 On September 7, 2020 at 12:45 p.m. our father/husband Arthur Lee Jan went to be with the Lord. At that time, he was 74 years old. His birthday was March 14, 1946. Art graduated from Lamar Consolidated High School in 1964. He then attended WCJC for 2 years before he was drafted to the U.S. Army in 1968. He served his country in Vietnam for 24 months. Before he was deployed, he married Linda Marie Meuth his high school sweetheart on June 17, 1967 (53 years). While serving his country he received several honors which included the Purple Heart. After returning he started his 31-year career with the U.S. Postal Service until he retired in 2001. Art was blessed with three children. Arthur Lee Jan Jr. (Lee) and wife Patti. Daughter Shelley (Jan) Wendt and husband Wade. Nathan Jan and wife Marissa. Along with kids he is survived by his 7 grandkids, Kirby Jan, Coleman Jan, Madison Jan, Mitchell Wendt, Nolan Wendt, Alexis Jan, and Tayton Jan. Art considered his grandkids one of the greatest blessings of his life. Along with kids and grandkids Art is survived by brother Alvin Frank Jan Jr., sister Faye Jan, and many other extended family members that he loved dearly. He was preceded in death by his parents Alvin and Ethelene Jan, in laws Albert and Ellen Meuth, and brother-in-law Michael Meuth. Art was extremely involved in his community. He was past president of Needville Athletic Booster Club, member of KC’s, American Legion Post 271, and St. Michael’s Church. Pallbearers are Dusty Jan, Cuyler Pawlak, Brian Meuth, Adam Meuth, Matt Meuth, Dustin Meuth, and Blake Meuth. Honorary Pallbearers are Coleman Jan, Mitchell Wendt, Nolan Wendt, and Tayton Jan. Visitation will be held at Davis-Greenlawn Funeral Chapel in Rosenberg, Texas on Thursday, September 10 at 6:00 p.m. followed by a Rosary at 7:30 p.m. Funeral services are to be held on Friday, September 11 at 11:00 a.m. at St. Michael’s Catholic Church in Needville, Texas. Note: Due to Covid guidelines, the number of guests will be limited at both services.

The family of Arthur Lee Jan created this Life Tributes page to make it easy to share your memories.

Send flowers to the Jan family.