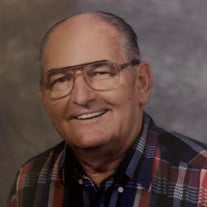 Allen Titel passed away on Friday, February 26, 2021 at the age of 93 years old. Services will be held at Davis Greenlawn Funeral Home with viewing prior to the services on Wednesday, March 3rd. Visitation will start at 12:00 PM, and Services will be at 1:00 PM officiated by Deacon Jerome Losack. Due to COVID restrictions, the attendance will be limited to 50 people. Allen was born on July 11, 1927 in Barker, Texas to Albert and Alma Krinkie Titel. His family moved to Sealy, Texas when Allen was a teenager. At a 4th of July dance in 1947 in Wallis, Texas, he met the love of his life, Mary Ann Aylor. They were married for 54 years before Mary Ann lost her battle with cancer. Allen worked for a number of companies including Brown & Root, Southern Sales, Alamo Explosives Ladshaw, and ICI selling and delivering explosives to oil exploration companies all over Texas. Since he was so well known by the oil exploration companies, after retiring, he worked as a contracted salesman until the age of 86. His grandchildren and great-grandchildren were his greatest joy. He followed his granddaughter, Stephanie, on all her college golf tournaments all over Texas, Oklahoma, Colorado and to Florida for her national tournaments. He enjoyed taking his grandson, David to dirt bike competitions and rollerblading parks. He was especially proud of him serving as a Marine in Afghanistan. He enjoyed going to musicals and plays in which his grandson Allen acted in high school and college. His great granddaughters, Kendall and Maddy and great grandson, Theo gave him such happiness. They all kept their Paw Paw really busy, and he loved every moment. Allen also enjoyed going to Denny’s in Rosenberg having coffee at the “round table” with his buddies, Carl, Bob, and Joe and any others that happened to stop by. He would also stop by Bo Tucker’s automotive shop to discuss all the important issues of the day with his friends. Allen was preceded in death by his parents, Albert and Alma Titel, his sister, Maxine Titel Hill, and his beloved wife, Mary Ann Aylor Titel. Allen is survived by his children, son, Allen Michael Titel and wife Mary, daughters, Dora Lee Titel, Pam Titel Beavers and husband Terry, and Lori Titel Sherman and husband Michael, his grandchildren David Boldger and wife Katie, Stephanie Boldger and wife Misty and Allen Michael, Jr. and wife Kelsey, His great grandchildren, Kendall and Madeline Boldger and Theodore Titel. We will miss our dad, his wise words, his helpfulness, his laughter, and his giving nature. The light in the world dimmed with his passing. Thanks to all the waitresses, workers and cooks at Denny’s and the workers and the regulars at Bo Tuckers, especially, Bo. Our dad really loved you guys. Words of condolence may be left for the family at www.davisgreenlawnfh.com Arrangements are under the direction of Davis-Greenlawn Funeral Home, 3900 B.F. Terry Blvd., Rosenberg, Texas 77471,

Allen Titel passed away on Friday, February 26, 2021 at the age of 93 years old. Services will be held at Davis Greenlawn Funeral Home with viewing prior to the services on Wednesday, March 3rd. Visitation will start at 12:00 PM, and Services... View Obituary & Service Information

The family of Allen Titel created this Life Tributes page to make it easy to share your memories.

Send flowers to the Titel family.